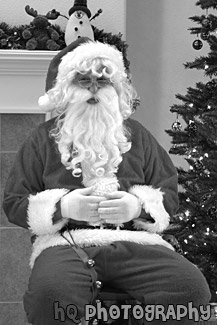 
Wallpaper Info | Commercial Use
A close up picture taken of Santa Claus sitting in chair near the Christmas Tree. In this picture Santa has a long white beard and is wearing his red suite. Santa Claus is a cousin to Europe's legendary St. Nicolas whose feast day is Dec. 6. But while Nicholas is shown as a slender man in a long, hooded coat, Santa is a fat, jolly elf. His name likely comes from the Dutch version of St. Nicholas which they call Sinterklaas (which when said in the Dutch language sounds a lot like the words Santa Claus to those who speak the English language).

Home > Objects > Holidays > Close Up of Santa Sitting in Chair