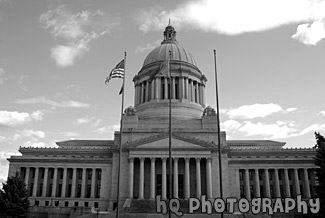 A scenic picture taken of the Washington State Capitol Building located in state capital city, Olympia on a partly cloudy day. This capitol building was first occupied by the Legislature in March, 1927. The design is reminiscent of the Acropolis in Athens, Greece. It is also closest in design to the U.S. Capitol in Washington, D.C. The building was constructed between 1912 and 1928. It is unique among state capitols in that instead of one large building, it consists of four separate buildings; the domed structure is the Legislative Building. The 287-foot high dome is the fourth tallest all-masonry dome in the world.