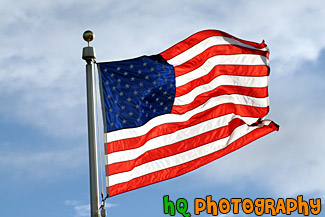 
Wallpaper Info | Commercial Use
A close up scenic picture taken of the United States America flag blowing in the wind off to the right. This picture was taken on a sunny day with blue sky in the background. The flag of the United States is one of the oldest national standards in the world. It was not until 1916 that the president proclamed a nationwide observance and not until 1949 that Congress voted for Flag Day to be a permanent holiday.