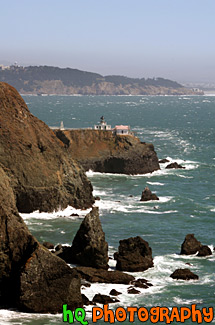 A scenic picture taken of some ocean rocks and the Point Bonita Lighthouse which is located just north - west of the Golden Gate Bridge and San Francisco, California. Point Bonita was the site of the first fog signal on the Pacific coast. The fog signal, which went into service on August 8, 1855, was an army surplus cannon fired every half hour in foggy weather. Point Bonita was the third lighthouse built in the San Francisco Bay area (in 1855) and was unique. The original tower, built separate from the residence, provided a lonely existence for the initial light keepers. There were no inhabitants for five miles and no direct communication. It was so inhospitable that seven keepers were employed within the first nine months of the operation of the light. Point Bonita was the last manned lighthouse on the California coast. The last keeper left in April 1981. It is now a part of the Golden Gate National Recreation Area and is run by the National Park Service. The Coast Guard continues to maintain the light and fog signal.