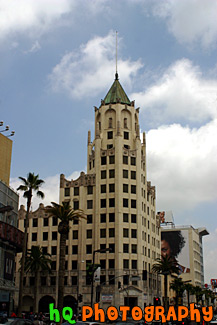 
Wallpaper Info | Commercial Use
A scenic picture of the Hollywood First National Building located in downtown Hollywood, California near Los Angeles. This building was built by architects Meyer & Holler in 1927 and is known as a historic site. This combination of Gothic and Art Deco was created by the same architects who designed the Chinese Theater which is located down the street. From 1927 to 1932 it was the tallest building in the city. However, Los Angeles City Hall was built in 1932 which became taller. The Hollywood First National Building is currently an office building that will be undergoing renovation by its owner since 1999. It is one of the most beautiful and detailed buildings on Hollywood Boulevard (at the corner with Highland Ave.) This building was constructed for the sum of $750,000 in 1927.