Kodak Theatre from Inside Photo 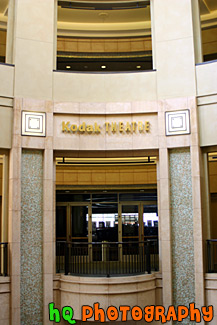 
Wallpaper Info | Commercial Use
A few of the front of the Kodak Theatre from the inside of the Hollywood & Highland Center. This 136,000 square foot theatre is the cornerstone of the new Hollywood & Highland development. The Kodak Theatre has also become the world's only live broadcast theatre. As such, it has been custom-designed for the special needs of Oscar Night and other live TV broadcasts. In the past, seats had to be taken out at other venues to make room for the TV cameras and other equipment. Not so at Oscar's new home - the Kodak Theatre. During live broadcasts, a unique "media cockpit" will rise above the center of the orchestra seating, and will act as the technical heart of the production, containing television cameras, sound & lighting equipment. The Kodak Theatre is also home to the finale of the popular tv show, "American Idol." Every season a new American Idol is crowned here!